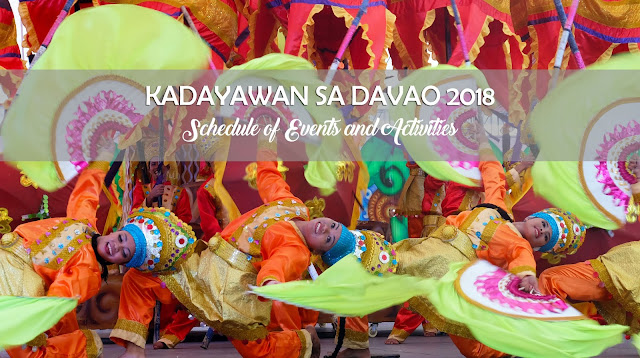 August 10, 2018, 2PM
R. Magsaysay Wharf
Subang Sinugdanan and Panagtagbo
A re-enactment of the convergence of Davao City’s 11 ethno-linguistic tribes.  This presentation is symbolic of Davao’s rich culture brought about by diversity and unity of its people.
August 10, 2018, 3PM
Kadayawan Circle (Magsaysay Park)
Pag-Abli sa Kadayawan
The festival’s opening ceremony that will commence with an ecumenical thanksgiving service for the year of blessing and bounty.  It will be a grand showcase of the colorful culture and tradition of Davao City’s 11 tribes.
August 10, 2018, 6PM
Kadayawan Circle (Magsaysay Park)
Hiyas sa Kadayawan Cultural Presentation (Talent Night)
A display of talent by the 11 Hiyas sa Kadayawan candidates – interpreting their respective tribes’ traditions and culture through colorful and engaging presentations.
Read: 9 FREE Tourist Spots in Davao
August 10, 2018, 6PM
Kadayawan Circle (Magsaysay Park)
Pananam Food Hall Opening
Pananam Food Hall will be Kadayawan’s version of a food court displaying the various tribal delicacies – allowing the locals and tourists alike to taste the “tribal cuisine.”
August 10, 2018, 6PM
Magsaysay Park
Kadayawan Village
The 11 ethno-linguistic tribes in Davao Region include Ata, Iranun, Kagan, Klata-Guiangan, Maguindanaon, Maranao, Matigsalug, Ovu Manuvu, Sama, Taga-bawa and Tausug. Their ways, culture and living are showcased in the village with authenticity.
August 10, 2018, TBA
Kadayawan Farmer’s Market
A bazaar of all the fresh produce and products that are indigenous to Davao Region.
August 11-12, 2018, 5AM
Sta. Ana Wharf
Kadayawan Dragon Boat Festival
Following its success from last year’s 1st Dragon boat Festival, this event further promotes Davao City as one of the paddling destinations in the country.
August 11, 2018, 3PM
Rizal Memorial Colleges Gym, Lopez Jaena Street
Hiyas sa Kadayawan The Coronation
A prestigious search for the symbolic Festival Gem.  Eleven young women from the distinguished tribes of Davao City will present in their indigenous garbs. The lass, who embodies her indigenous culture and wisdom in this modern times will be crowned “Hiyas sa Kadayawan”.
August 12, 2018, 8AM
People’s Park
Mugna Kadayawan
Mugna Kadayawan will manifest artistry of young aspiring and professional artists inspired by Kadayawan’s theme in a huge canvas.


August 13, 2018, 7pm
Matina Town Square
Tunog Kadayawan
An indie music competition that exemplifies the creativity of Mindanaoan composers and songwriters.
August 14, 2018, 2PM
SM City Davao
Sayaw Kadayawan
A competitive artistic fanfare of folklore, traditions and cultural practices through choreographed presentation
August 15, 2018, 3PM
SMX Convention Center, SM Lanang Premier
Kadayawan Ball
Tourism stakeholders alongside its partners both from the public and private sectors dressed in Kadayawan haute couture designed by the members of Davao Fashion Design Council.
August 16, 2018, 3pm
SM Lanang Premier
Habi Kadayawan
Art form through design and fashion that will bring Kadayawan-inspired accessories and apparel to the next level. Habi Kadayawan exhibits the creation of young professional designers who are inspired by indigenous crafts and lifestyle.
August 17, 2018, 9AM
People’s Park
Dula Kadayawan
An activity to further promote camaraderie among the 11 tribes.
Dula Kadayawan will be an experiential activity for locals and tourists alike who will get to interact with the tribes through their games.
Read: Where to Stay in Davao Under Php2,000
August 18, 2018, 7AM
Kadayawan Square
Indak-indak sa Kadayawan
A celebration and merriment through choreographed and theatrical street-dancing competition inspired by Mindanao’s rich cultural heritage – the contingents’ artistic interpretation of Kadayawan’s theme.
August 18, 2018, 7AM
Kadayawan Square
Kadayawan Kosplay
“Kosplay” is a Kadayawan character play paying tribute to the Philippine Eagle that will be participated by various creative artists.
August 19, 2018, 7AM
Kadayawan Square
Pamulak sa Kadayawan
The grand finale parade of the Kadayawan sa Davao Festival. This highlights the abundance of Davao Region’s flora and fauna presented with artistry interpreted in decorative floats.
August 19, 2018, 7AM
Kadayawan Square
Pitik Kadayawan
Kadayawan Festival vibe interpreted by drumbeaters.
August 28, 2018
Pasasalamat
A thanksgiving gathering recognizing the participation of all stakeholders, organizers and festival partners. 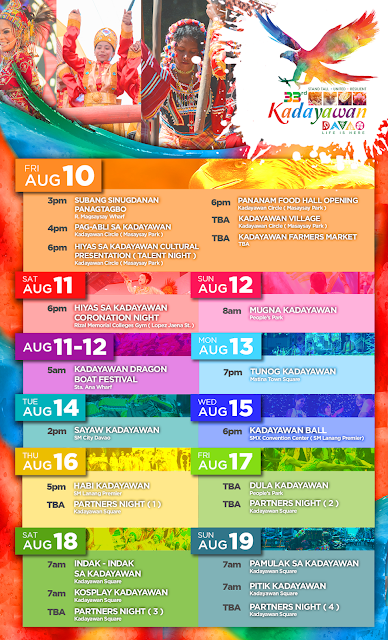