What an unfortunate day to end our adventure in Cusco!
There is an ongoing transport strike in Cusco and we didn’t know about it. There was no warning from the hotel or from the airline since we have a flight today from Cusco to Lima. We even tried to roam around the historic center early in the morning to have a last glimpse. We noticed that there were no cars in the streets but we thought it’s a holiday or there’s going to be a celebration so we continued looking for the central market to shop. We also observed the police presence almost everywhere. After some time, we asked a street vendor with my broken Spanish where is the market and he told us that it’s closed because of the ongoing transport strike. We didn’t really understand much because he spoke in Spanish but we knew right there we could be in trouble because we have an early afternoon flight. We wanted to confirm what we thought, so I asked another local and he confirmed about the protest.

We hurried back to the hotel and asked the receptionist about the strike and he said don’t worry because he can call a taxi for us. After about 20 minutes of waiting, the receptionist told us that we had to walk few blocks to meet our driver that will bring us to the airport.
We finally head our way to the airport. We were already warned that we have to get down about 10 blocks away from the airport because there are protesters in the area. We understood, at least we don’t have to walk for around 5kms to reach the airport. Along the way, we saw fellow travelers with their luggage walking in the streets heading to the airport. We felt lucky until we were mobbed by protesters. The first attempt was unsuccessful. We were able to pass safely. After a couple of minutes, there were more protesters and the inevitable happened.

They mobbed us. We don’t understand what they’re saying because they spoke in Spanish, but it was clear to us that we’re in trouble. We remained calm. They started deflating the tires of our car one by one. We begged for them to let us pass but they were serious about their cause. They don’t want vehicles running in the streets. Most of them left us after they deflated all the tires.
We still felt lucky because they did not harm us but it was a traumatic experience. We felt sad for the driver who tried to bring us to the airport.
We had no choice but to walk going to the airport. One of the protesters even guided us how to get to there. I checked my offline map and saw that the airport is about 2kms away. We started walking as fast as we could until we reached a roundabout with lots of policemen. 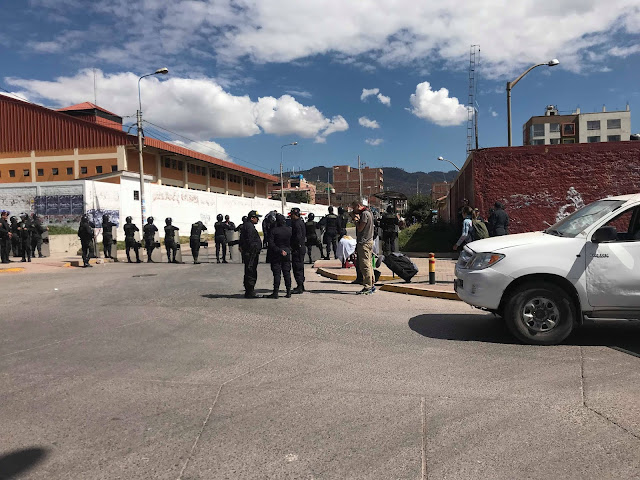 The street leading to the airport was cordoned so that protesters will not be able to go near the airport. There was another car who offered to bring us to the airport so we immediately took the offer since it’s still around 1km. We were still worried that we will get mobbed again but luckily we arrived at the airport safely. I just hope that the protest has ended peacefully. Whattaday!