Davao City is more than just about durian and President Digong, it’s also a great destination for a gastronomic treat. Here’s a list of must-try food and drinks in Davao and where to find them. (Read: Davao City Travel Guide) 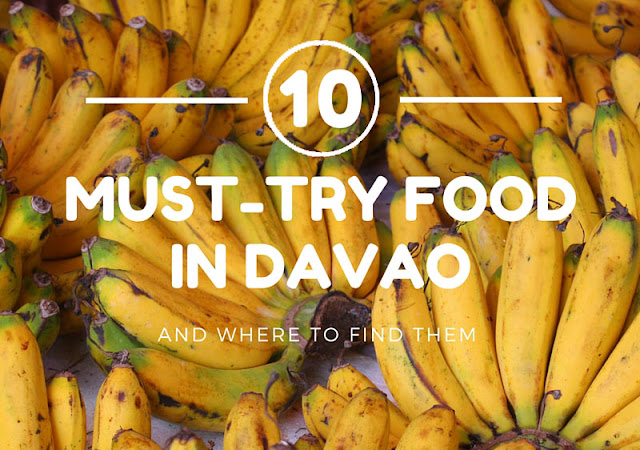 Pakfry is derived from the words paksiw and fry. As the name suggests, it goes through two processes to cook. The first step is to cook it with vinegar and spices and then deep fry it for a crispy texture. Pakfry is made from a tuna buntot (tuna tail) which is abundant in Mindanao. The best place to try this uniquely Davao dish is at Palovince Restaurant in Dakudao Avenue, Davao City.

If you want to have a taste of durian and you’re not adventurous enough to try the fresh pulp, I highly suggest you try the Durian Cheescake. The best place to have it is at Lachi’s Restaurant in Marfori Heights. Lachi’s also serve green tea cheesecake and sans rival which are equally good. Please note that they are closed on Sundays and only open Monday to Saturday at 11am to 8pm.

assorted cakes and tortes here at #lachis Sobrang sarap as usual! #davaofood #dfat #davaodesserts
A photo posted by Glen Santillan (@escapemanila) on May 17, 2014 at 6:09am PDT

Satti is popular in Zamboanga City and parts of ARMM but you’ll be suprised we also have an equally delicious and authentic Tausug dish in the city. You can have Satti at Davao’s Pers Satti Haus located at Unit 25-26 Tiyanggehan, Matina Pangi, Davao City. Aside from Satti, you may also try their Chicken Piyanggang, so good!

Seafood in a bag is not a uniquely Davao dish since it’s available anywhere in the country but Davao offers a special version which I am pretty sure will satisfy your palate. The best place to have it is at Blue Post Boiling Crabs and Shrimps in Lanang, Davao City. I bet you’ll love it there.

Davao is known for its many varieties of Durian available all-year round. The best time to try them is during Kadayawan season since the price per kilo would drop to about P25. You can have durian almost anywhere in the city proper but the best place to have them is in Magsaysay Park Fruit Stand or in Bankerohan Fruit Market. It’s cheaper if you get it in Bankerohan though.

If you’re into fruits, then Davao is the place for you. Fruits are really cheap in the city especially during Kadayawan Season. Davao’s sweet pomelo is available everywhere in the city including in the airport. I suggest you get it in Bankerohan or in Madrazo Compound.

Davao is known for its strictly implemented liquor ban but it doesn’t mean there’s no night life in the city. All you have to do is start early if you want to consume more alcohol. One of Davao’s unique alcoholic drink is Huckleberry’s Infused Rum – made with mangosteen, santol, chili, chocolate and more. Huckleberry Southern Kitchen & Bar is located at Rizal St. Davao City.

Choose your poison. Infused rum @huckleberry_davao
A photo posted by Davao Portal #ilovedavao (@ilovedvo) on Jul 4, 2016 at 5:35am PDT

Suman is a traditional Filipino rice cake that is usually made from glutinous rice cooked in coconut milk and sugar, wrapped in banana leaves and then steamed steamed. Tsokolate on the other hand is a popular drink in the Philippines made from a local variety of cacao commonly called tablea. The best place to have it Davao is at Seagull Mountain Resort in Buda Road. But, if you want to have it in the city proper, you can conveniently have them at Habi at Kape in Abreeza Mall.

Kalderobo or kalderetang adobo is a beef stew with a twist and is one of Rekado’s signature dish. Rekado is located at 1050 Jacinto Extension, Bgy. 11-B, Davao City.

Kalderobo, beef caldereta + adobo! Read on the blog at www.ilovedavao.com
A photo posted by Glen Santillan (@escapemanila) on Nov 15, 2015 at 3:05am PST

If you’re into comfort food and you love goto and tokwa’t baboy, there’s only one place to go – Dencia’s Restaurant. It’s located in General Luna St., near Gaisano Ilustre