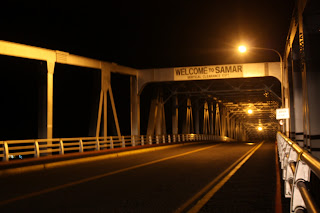 I left Tacloban City in the morning bound for Catbalogan. When I reached Catbalogan, I immediately looked for a place to stay. I found a hotel near the van terminal but when I asked the receptionist what are the attractions of the town she said there’s nothing really except the night life so I decided to leave Catbalogan and took a van to Calbayog.
I was initially planning of staying in Calbayog but for some reasons I’ve decided not to stay overnight and proceeded my journey to Allen. I did a quick look at Calbayog City proper. I was looking for an ATM to withdraw some cash as I do not know if there are ATMs in Allen. I visited three ATMs and all were offline. I thought that was a sign that I needed to stay in Calbayog but luckily a lady told me that one ATM near the city hall is online. So, I immediately asked for directions and walked my way to the city hall.
The 5PM trip to Allen was already full so I had to wait for the last trip at 5:40PM. Actually, the last trip was supposed to be at 5PM but because there are still a lot of passengers, the transport company decided to do another trip to Allen.
The road to Allen was bumpy. DPWH needs to seriously look at the road. The holes were big and the road basically is dilapidated. It needs to be repaired soon before accident could happen. It needs major rehabilitation. It’s the worst part of the Maharlika highway.
After almost 2 hours, I arrived in Allen. I took a tricycle from the van terminal to Pahayahayan Hotel. I checked  in and paid P250 for 12 hours stay. Slept and headed to Biri the following day.